Description : A police detective in the asteroid belt, the first officer of an interplanetary ice freighter, and an earth-bound United Nations executive slowly discover a vast conspiracy that threatens the Earth’s rebellious colony on the asteroid belt.

The Expanse is an American science fiction television series on Syfy, developed by Mark Fergus and Hawk Ostby, based on the series of novels by Daniel Abraham and Ty Franck (writing under the pseudonym James S. A. Corey). Set in a future where humanity has colonized the Solar System, it follows United Nations executive Chrisjen Avasarala (Shohreh Aghdashloo), police detective Josephus Miller (Thomas Jane), and ship’s officer Jim Holden (Steven Strait) and his crew as they unravel a conspiracy that threatens peace in the system and the survival of humanity. It also deals with the fractious relationship between Earth, Mars and the Outer Planets Alliance (OPA). The OPA is an organization that fights for the interests of inhabitants of the (Asteroid) Belt. Unrecognized as a governing body, the OPA is often accused of outlaw tactics. 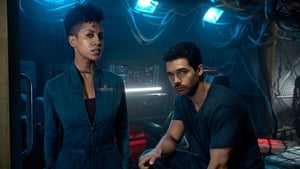