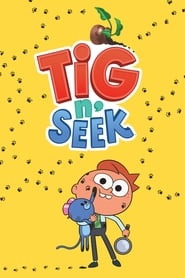 Description : Follow 8-year-old Tiggy and his gadget-building cat, Gweeseek, as they search for the lost items of Wee Gee City. With Tiggy’s cheerful attitude and Gweeseek’s exceptional inventing capabilities, the duo humorously navigate day-to-day dilemmas at the Department of Lost and Found.

Tig n’ Seek is an American animated television series created by Myke Chilian for Cartoon Network, who previously served as a designer on Rick and Morty as well as a writer and artist on Uncle Grandpa.[1] It is produced by Cartoon Network Studios. The show was originally set to premiere on Cartoon Network but was moved to the then-upcoming streaming service, HBO Max. The first season premiered on July 23, 2020 on HBO Max. The show was renewed for a second season which premiered on March 11, 2021.[2]